Game of Thrones locations are dotted all around the Bushmills area so lose yourself in these mysterious landscapes! There's never been an easier way to find your way around our glorious region. The Causeway Coastal Route is a way-marked 120 mile trail of outstanding scenic drives and attractions which, taken together, make up what has deservedly been described as 'one of the world's great road journeys'. 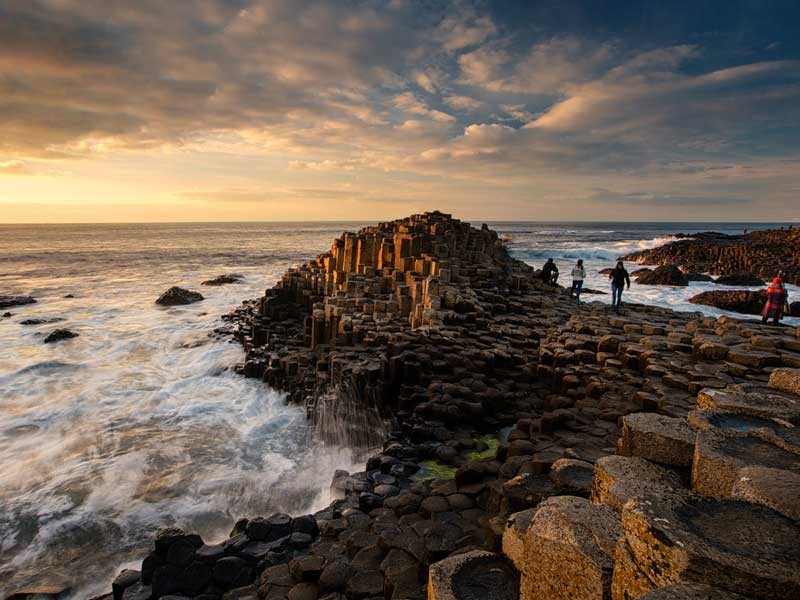 This breath taking natural wonder of the world and most visited tourist attraction in Northern Ireland is home to the legendary Giant Finn MacCool. The Giant's Causeway, Northern Ireland's first UNESCO Heritage Site, is a geological wonder and home to a wealth of history and legend. The 40,000 basalt stone columns left by volcanic eruptions 60 million years ago intrigue and inspire visitors.
State of the art interpretation within the award winning Visitor Centre unlocks the mystery and stories of this amazing place and offers a unique glimpse into the wonder that is the Giant's Causeway. Visitors can explore way-marked trails and enjoy spectacular coastal scenery accompanied by an innovative audio-guide available in 11 languages. Personalised guided tours also available.
Quality craft, gift shop and café.
How to get here:
Car – 5 Minute’s
Walk – 1 Hour
Public Transport – 15 Minute’s (Walk to bus stop & bus journey)
Cycle – 15 Minutes 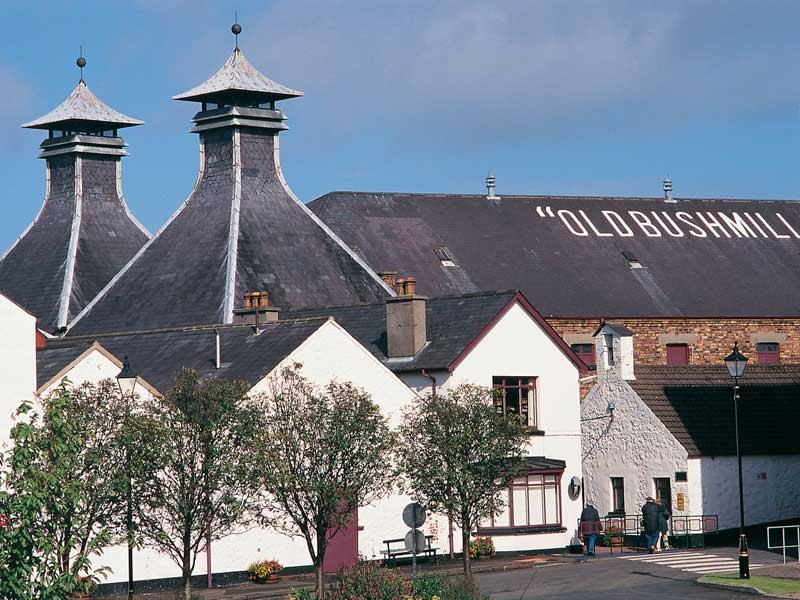 Bushmills Irish Whiskey is made at the oldest licenced working distillery in the world.
The original grant to distil was signed in 1608 by King James 1st and has been distilled on the same site ever since.
The Bushmills Brand Experience encompasses guided tours around a working distillery with all the associated sights and smells, tutored whiskey tastings, a specialist whiskey shop and a gift shop with exclusive Bushmills merchandise. At the conclusion of your tour you will be offered a whiskey or a soft drink in the 1608 Bar. The Distillery Tour Centre is open 7 days a week.
How to get here:
Car – 1 Minute
Walk – 7 minutes
Cycle – 3 Minutes 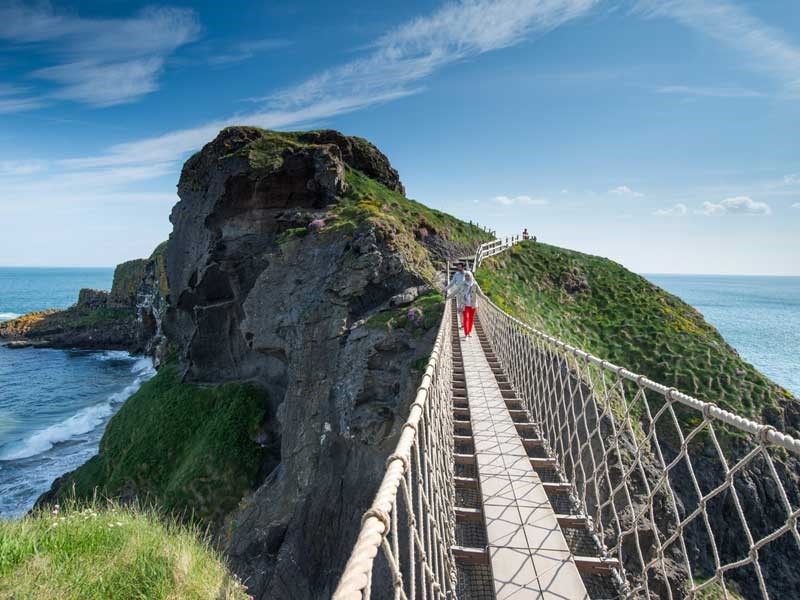 Suspended almost 100 ft (30 m) above sea level, the rope bridge was first erected by salmon fisherman 350 years ago.
Connected to the cliffs by rope across the Atlantic Ocean, Carrick-a-Rede Island (home to a single building - a fisherman's cottage) is the final destination.
This attraction’s overflow car park is a very famous film spot in Game of Thrones and is spectacular natural beauty.
How to get here:
Car – 15 Minute’s
Public Transport – 40 Minute’s (Walk to bus stop & bus journey)
Cycle – 80 Minutes 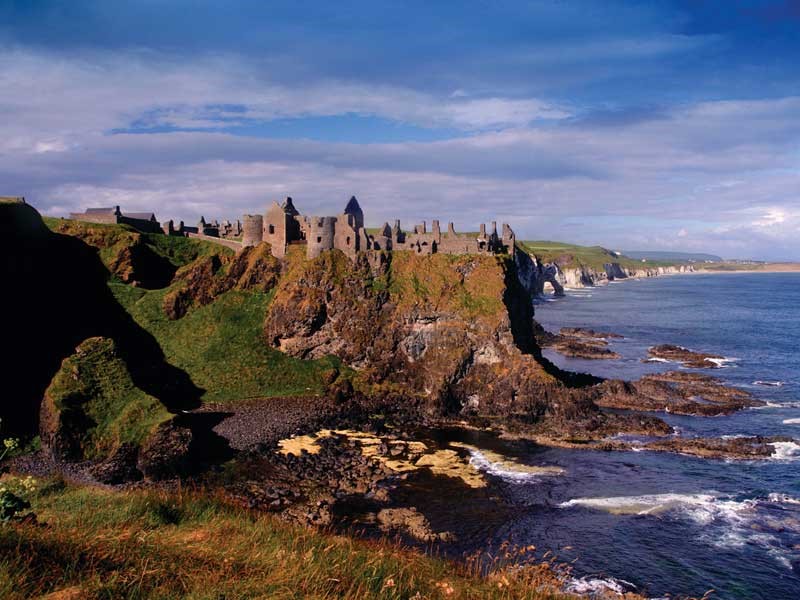 The iconic ruin of Dunluce Castle bears witness to a long and tumultuous history. First built on the dramatic coastal cliffs of north County Antrim by the MacQuillan family around 1500, the earliest written record of the castle was in 1513.
It was seized by the ambitious MacDonnell clan in the 1550's, who set about stamping their mark on the castle under the leadership of the famous warrior chieftain Sorely Boy MacDonnell during an era of violence, intrigue and rebellion.
In the 17th century Dunluce was the seat of the earls of County Antrim and saw the establishment of a small town in 1608. Visitors can explore the findings of archaeological digs within the cobbled streets and stone merchants’ houses of the long-abandoned Dunluce Town.
The dramatic history of Dunluce is matched by tales of a banshee and how the castle kitchens fell into the sea one stormy night in 1639.
How to get here:
Car - 5 minutes
Walk - 1 Hour 10 Minutes
Cycle - 25 Minutes 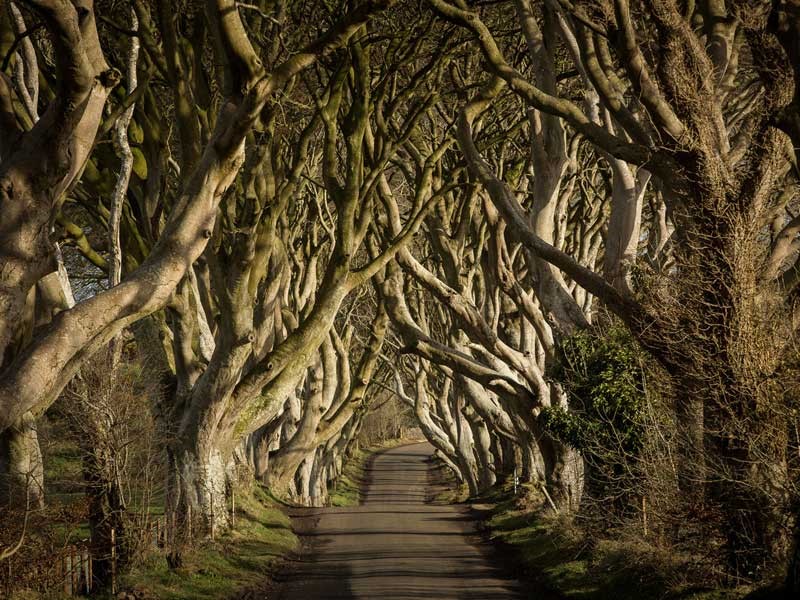 This beautiful avenue of beech trees was planted by the Stuart family in the eighteenth century.
It was intended as a compelling landscape feature to impress visitors as they approached the entrance to their Georgian mansion, Gracehill House. Two centuries later, the trees remain a magnificent sight and have become one of the most photographed natural phenomena in Northern Ireland. In fact, the iconic trees have been used as a filming location in HBO's epic series Game of Thrones®, representing the Kingsroad.
How to get here:
Car – 16 Minute’s 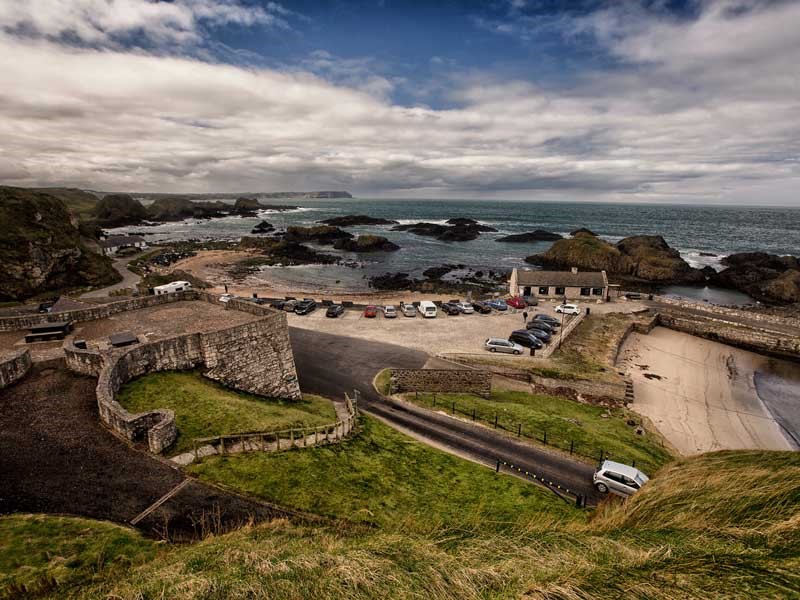 Ballintoy Harbour can be discovered in the picturesque village of Ballintoy. Known as a ‘raised beach’, it is located alongside the B15 coast road, 17 miles north-east of Coleraine and five miles west of Ballycastle.
The small fishing harbour can be found at the end of a small narrow steep road down Knocksaughey Hill, which passes by the entrance to Larrybane and Carrick-a-Rede Rope Bridge. The village itself, which is just one kilometre from the harbour, has a charming array of small shops, two churches, including the quaint white Ballintoy Parish Church on the hill above the harbour, as well as tourist accommodation, restaurants, commercial and social facilities.
For those looking to capture a true sense of Irish rural life, it is an ideal stop over whilst touring the coastal route.
It has been used as a filming location in HBO's epic series Game of Thrones. This stunning harbour location has been used for exterior Pyke shots and as the Iron Islands. Go to www.discovernorthernireland.com/gameofthrones to find out about other Game of Thrones Filming Locations in Northern Ireland.
How to get here:
Car - 15 Minutes
Cycle - 50 Minutes 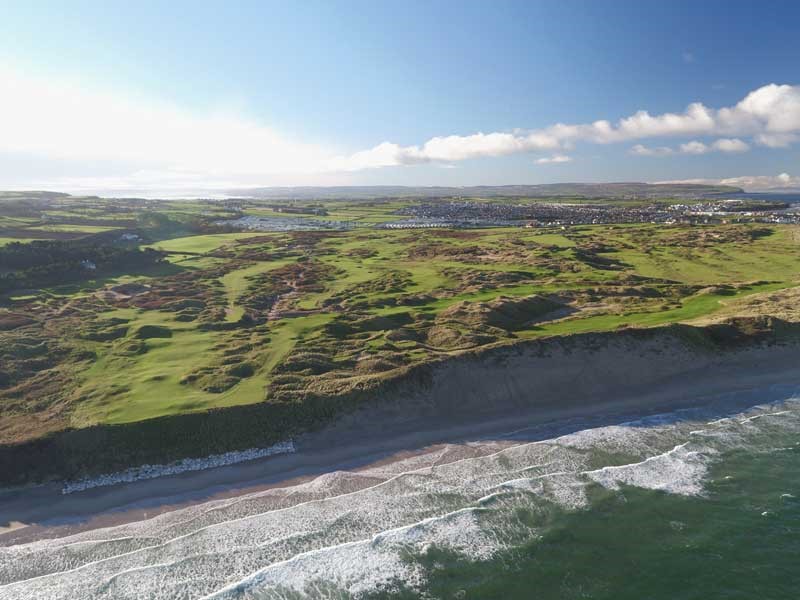 Voted Number 7 in the World's 100 Greatest Golf Courses, Golf Digest (2017).
Founded in 1888, the legendary Royal Portrush Golf Club has two Championship Courses – the renowned Dunluce Course and the smaller but equally enjoyable Valley Course. Both command impressive views across the North Atlantic with breathtaking views of Scotland and Donegal but the golf is even more spectacular.
The Dunluce Course, re-designed in 1947 by Mr H.S. Colt and later in 1951, became host to the first ever Open Championship held in Ireland. During the entire tournament only two golfers managed to break 70. It’s easy to see why; the greens are scattered among huge sand dunes gently raised above the Antrim Coast providing vistas of sea, cliffs and islands. But no matter how appealing the view, attention must be paid to your game as Portrush can challenge even the most experienced of golfers. Portrush’s most celebrated holes are the fifth hole and the fourteenth. The fifth, ‘White Rock’ is one of the most exhilarating two–shots in golf. Over hit the second shot, and your ball disappears into the Atlantic! The aptly named fourteenth Hole, ‘Calamity’ requires total precision to carry the ball over an enormous ravine. Mis-hit this one and you could be taking your next swing from at least fifty feet below the hole. Is it any wonder that Golf World magazine regularly rates Portrush in the world’s top twenty golf courses?
What the experts say: “The course winds its way back inland, twisting and undulating, until it comes to a heart stopping pause at Calamity Corner. This hole, the hardest par 3 I’ve ever seen, plays 210 yards, uphill and into the wind to a green on the side of a cliff. I retired to the upstairs bar and began the slow process of returning to our accustomed selves – the ones who play the ordinary, earthbound kind of golf.” Charles McGrath, New York Times.
How to get here:
Car - 8 Minutes 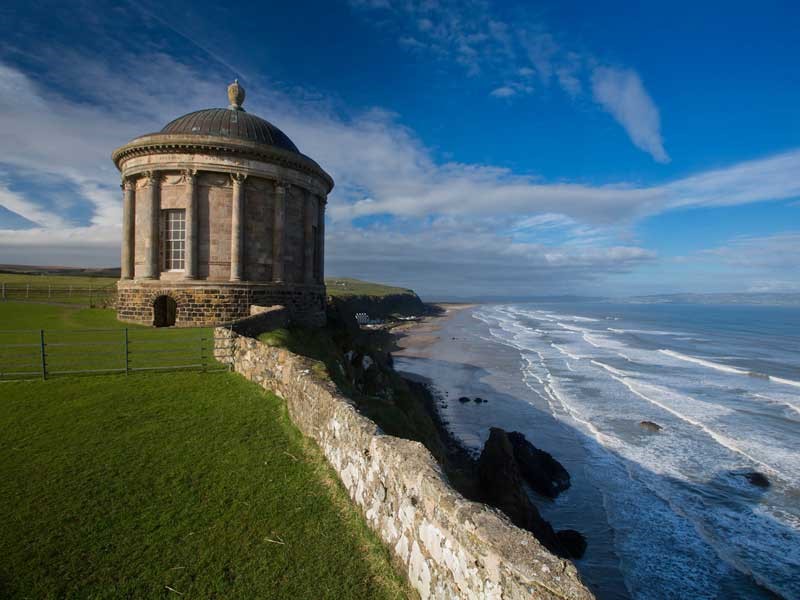 Mussenden Temple is located in the beautiful surroundings of Downhill Demesne near Castlerock in County Londonderry. It perches dramatically on a 120 ft cliff top, high above the Atlantic Ocean on the north-western coast of Northern Ireland, offering spectacular views westwards over Downhill Strand towards Magilligan Point and County Donegal and to the east Castlerock beach towards Portstewart, Portrush and Fair Head.
History of Mussenden Temple
The temple was built in 1785 and forms part of the estate of Frederick Augustus Hervey, Bishop of Derry and Earl of Bristol (or the Earl Bishop). The temple was built as a summer library and its architecture was inspired by the Temple of Vesta in Tivoli, near Rome. It is dedicated to the memory of Hervey's cousin Frideswide Mussenden.
Both the Temple and the surrounding views are among the most photographed scenes in Ireland. Over the years the Temple itself was under danger of being lost to the sea due to the erosion of the cliff which brought Mussenden Temple ever closer to the edge. In 1997 the National Trust then carried out cliff stabilisation work to prevent the loss of this lovely building.
How to get here:
Car - 25 Minutes

Best Location in the North Coast of Northern Ireland

Preference cookies are used to keep track of your preferences, e.g. the language you have chosen for the website. Disabling these cookies means that your preferences won't be remembered on your next visit.

We use analytical cookies to help us understand the process that users go through from visiting our website to booking with us. This helps us make informed business decisions and offer the best possible prices.